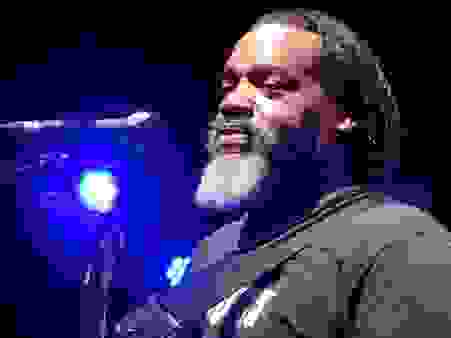 Ike Willis (b. November 14, 1955) is an American singer and guitarist who was a regular sideman for Frank Zappa, First joining Zappa's band for the fall 1978 tour and remaining in the band for several years. Ike did not tour with Zappa in 1981 and 1982 for personal reasons, but returned to touring with Zappa for his final two tours in 1984 (which Zappa intended at the time to be his final tour) and 1988. Ike currently tours with several Frank Zappa tribute bands including ZAPPATiKA,  Ossi Duri, Project/Object, Pojama People and Ugly Radio Rebellion. He's also performed several times with the Brazilian Zappa cover band, The Central Scrutinizer Band, The Muffin Men,  and with the Italian band  Elio e le Storie Tese.  Additionally, he has appeared multiple times at the annual Zappanale festival  in Bad Doberan, Germany.
Ike is most recognized for his involvement in Zappa records such as playing Joe in  Joe's Garage, providing vocals on Tinsel Town Rebellion, You Are What You Is, The Man from Utopia, and as the title character and narrator in Zappa's off-Broadway-styled conceptual musical Thing-Fish.

It was while in college at Washington University, St. Louis that Ike Willis and Frank Zappa met. As a guitar player since the age of  8, Ike was studying political science. He volunteered to help with the concert committee just so he could get a "Back Stage Pass" to meet Frank Zappa. The rest as they say, is history.

As the one of longest playing members of Frank Zappa's bands, Ike is still upholding his promise to Frank. That promise is to continue on, playing the music of which Zappa had taught Ike oh so well. To this day Ike fulfills Frank's wish by playing with some awesome Zappa tribute bands from around the world.

Ike Willis - The Voice - The Legend

Sign up to receive tour updates and Ike Willis news.